Finding the Flow
For ordinary folks, scooters are the best kind transportation in Taiwan. Not only do they, like water trickling merrily through rocks, percolate up to the front of the line between jammed up cars at traffic lights. They also are cheap to operate (fuel in Taiwan, like most other countries in the world, does not come cheaply). And basically scooters have free rein of any available paved space, and in any direction at that. In America, we call up the image of a horseback cowboy on the open range as the symbol of unconstrained freedom; in Taiwan that kind of liberty is found on a scooter. 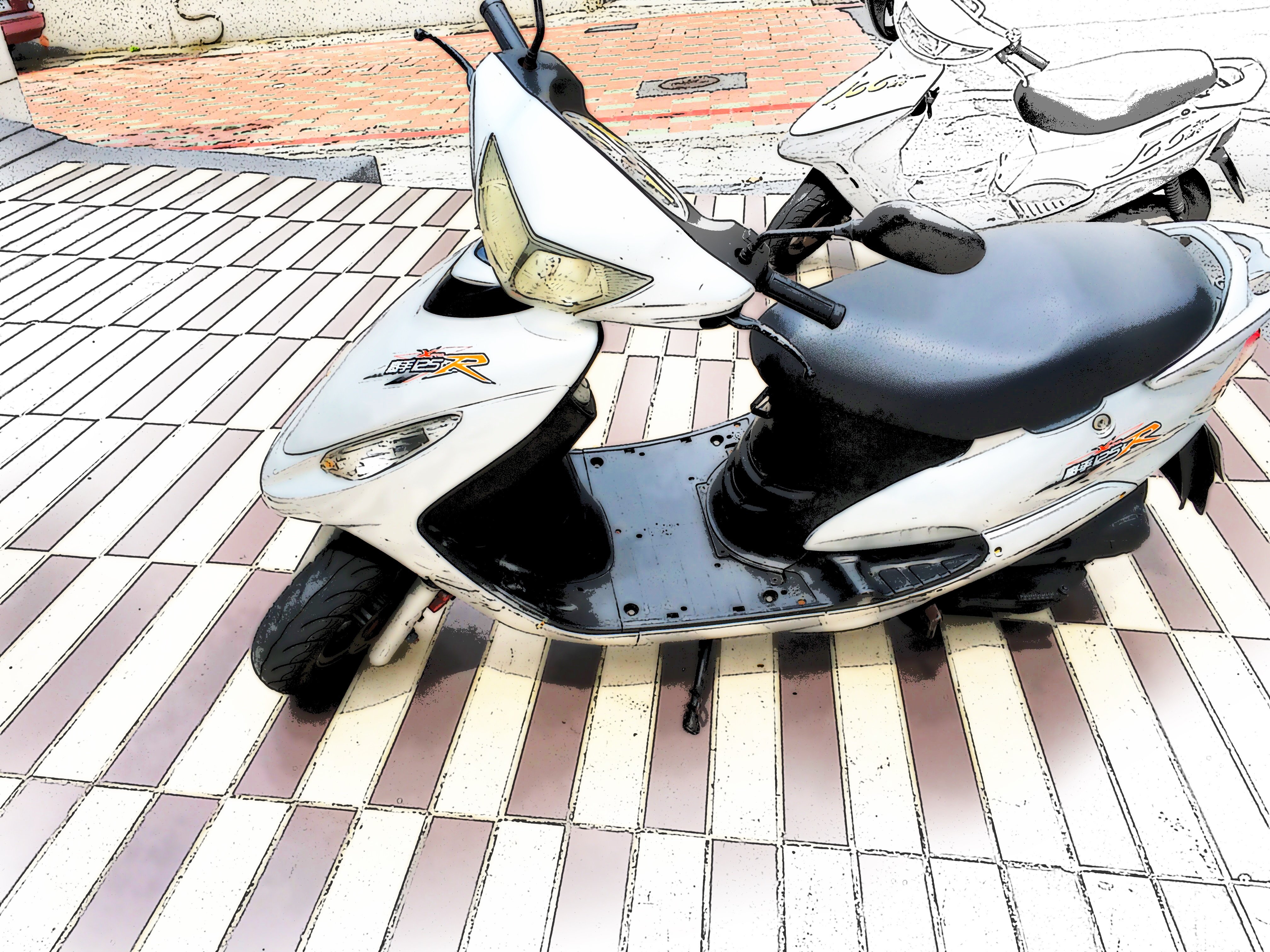 Renting a scooter is surprisingly easy. The first question asked is “What size engine do you want?” The second, “Where are you located and how soon do you want it?” There is not need for a credit card or deposit. A cell phone number would be nice, but since I don’t have one connecting on the social media app “Line” is good enough. Twenty minutes later the two wheels of freedom are delivered to my door. A quick signature (Chinese, English, both ok) and cash for four days of rental and I’m good to go.

To the unaccustomed eye, Taiwanese traffic appears to be a cross between confusion and a death wish. As a friend once pointed out “traffic rules, like those lines in the street, are just suggestions.” In fact, there is an order to it all. And it’s quite simple. There are just three rules of traffic to keep in mind, which will allow everything to call into crystal clear view. 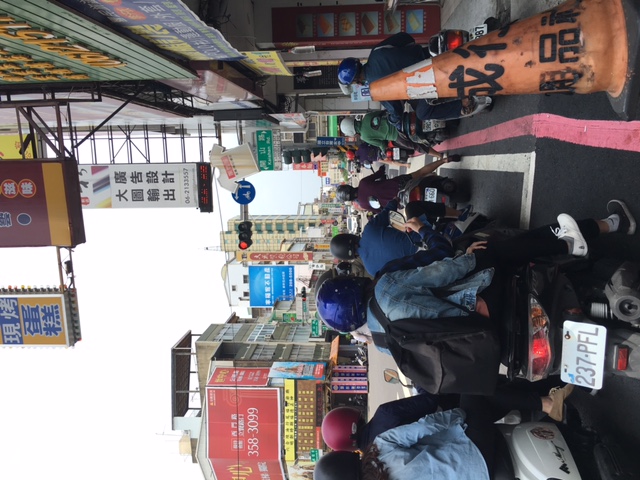 The Rules of Taiwanese Traffic

Rule Number One-  If there is a space, it may be filled.

Unlike the big bubbles of space we project around ourselves into the US, Taiwanese bubbles of personal space go just a few inches beyond your skin. Any space between any vehicle, on any form of pavement, may be filled. I can fill it, you can fill it, someone else can fill, it’s completely impersonal. The American road rage of “that bastard cut me off” doesn’t show up here. If there is a space, it may be filled. Simple really.

Rule Number Two-  Who ever is in front has the right of way. This is easy to understand, we have this idea in America. Don’t go smacking into the vehicle in front of you.

Rule Number Three-  Who is in front is always, and at every moment, up for negotiation.

It’s the last one calls forth the uncanny ability to light up both sides of your brain, and attunes your sensorium to join the school of fish flow of traffic. It requires a loose constant attention to the moving spacial relations of everything in front, to the side and in back of you. 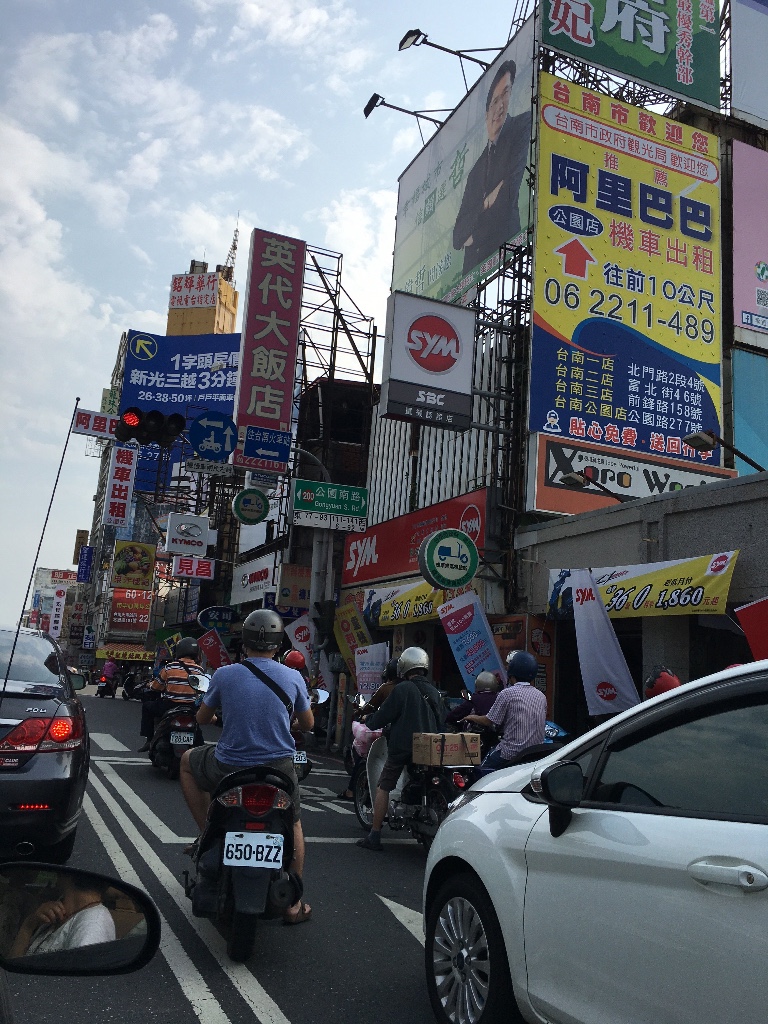 This may sound tiring, but there is a kind of sonar, a kind of murmuration, a way of tapping into a level of order that comes not from rules, but from a melding of inertia, surrender and attentiveness in the slipstream of scooters, buses, taxis, trucks and cars.

It most assuredly is not a disregard for others, or a cavalier “Screw you, I’ll just do what I want.” Although the occasional old granny or distracted teenager with a cellphone jammed into his safety helmet will cause a ripple in the flow. It is an exquisite mode of attention that marries visual and auditory perception with feeling. One that indeed does take the rules as suggestions, and encourages an attentive inhabiting of the ever-changing moment.

“The most useful piece of learning for the uses of life is to unlearn what is untrue.”